Have you ever noticed how often the title of Ten Commandments is used to list the most important rules of everything from buying a car to earning money on the internet?  When I wrote Ten Essential Words, I set up a Google alert to let me know what was trending online for the phrase “Ten Commandments.”  Each week I am amazed at how often this phrase is applied to any topic imaginable.  Here are just a few examples:

You get the idea.  One way to make your list the definitive list is to attach the moniker The Ten Commandments of [insert topic here].  Atheists have even felt the need to come up with their own ten commandments.

So what makes the idea of listing ten items such an enduring one?  After all, there were many more laws and commands in the Old Testament than just the traditional Ten Commandments.  As I write in Ten Essential Words:

Oddly enough, the Bible never explicitly gives these statements the title we have given them – the Ten Commandments. In the Hebrew Scriptures, the phrase that is used is aseret devarim, which literally means “ten words.” The root Hebrew word davar, however, has a wide range of meaning from the simple idea of a word to the more encompassing ideas of statements, speeches, and commands. So our English version of the Bible interprets “ten words” as the phrase “ten commandments.”

Yet there is something exceptional about this list.  At a time when ideas were passed down orally, it is notable that God instructed Moses to write this list down – carve them in stone.  God did not want the Israelites to forget this list.  Additionally, at a time when nobody could really walk around with stone tablets to refer to, a list of ten words or phrases could be easily memorized and recalled.

Today’s modern society does not memorize much of anything anymore.  Thanks to the internet and smart phones, all we have to do is google a topic in order to recall it.   Studies show that we moderns can recall two or three main points, far less than a list of ten.  Jesus reduced this list of ten commands down to two: love God with all your heart and love your neighbor as yourself.

Still, there is something enduring about taking a complex issue and reducing it down to ten bullet points.  Perhaps this explains why the label, The Ten Commandments of…, will continue to serve as the defining list for any and every topic, be it dating or cruise ship buffets. 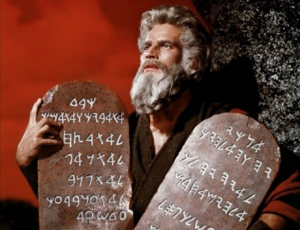 Which way to the buffet?

Recently, prominent atheist Alain de Botton constructed a list of 10 commandments that would promote virtue in a society, even if that society were moving past the need to believe in God – a 10 commandments for atheists.  In an article in The Telegraph, de Botton writes,

Even if we now realise that we made up our own moral exhortations, we have no cause to do away with them all. We continue to need reminders to be sympathetic and just, even if we do not believe that there is a God who has a hand in wishing to make us so.

de Botton explains that even though he rejects the idea of a moral code originating from God, there is something to be learned from the promotion of virtue, leading him to come up with his own list, “If I had to design a list of 10 virtues that could apply today, I might go for the following”:

In subsequent articles, de Botton’s list has been praised as a more enlightened list than many outdated moral codes.  Others have chimed in, blogging about de Botton’s list and constructing their own 10 commandments for society to live by.  One such blogger has devoted much time to demonstrating the archaic and outdated nature of the Biblical 10 Commandments, as well as coming up with a list of his own.

Actually, I must admit that de Botton’s list is not a bad list.  I’m not sure I would reject anything on that list as immoral or self-indulgent.  And having perused a handful of these newly emerging 10 commandment for atheists lists, there really isn’t much to dismiss from them.  Surely the world would be a better place if religious, agnostic, and atheist alike tried to embody most of the virtues being put forth on these lists.

But here is the thing.  My concern is not so much with the content of these lists as the precariousness of the philosophy that lies behind them.  Actually, two issues come to mind:

As much as I might like to think that I could come up with a list of virtues that should govern society, I am glad that responsibility does not fall on me.  It is because religious people believe that the 10 Commandments originate from God (and not Moses) that those commandments have moral authority to govern our lives.  Of course, people of faith will not always live up to these commands – this is one of the points Jesus asserted many times.  The cultural expressions (enforcement, punishment, promotion, etc.) of these commands looks different today than 3,000 years ago, but the principles behind the expressions are enduring.  This issue is one of the main themes of Ten Essential Words, (and is an issue that is not readily understood my many critiques of the Ten Commandments!).

People are certainly free to believe what they want to believe.  I have never been one to assert that the 10 Commandments should be displayed on every street corner, whether you hold to them or not.  And if you don’t believe in God, I would not expect you to live by the Ten Commandments.  But if God does not exist, then I become my god and you become your god, and we begin to resemble Mount Olympus, full of competing deities all battling for their share of power and moral authority.

I do believe there is a God and am happy to let God be God!  I don’t want the job.