Easter weekend brought another showing of the movie, The Ten Commandments.  I confess I had to watch Charlton Heston, err…rather Moses, lead the Hebrew people out of Egypt and safely across the Red Sea.  It’s one of those movies that I always have to stop and watch at least a couple of minutes, even though I have seen it numerous times.

This past week, I was playing around with some Google features and ran across an article by Bruce Feiler –   who I enjoy as an author – entitled “Ten Secrets of The Ten Commandments.”  At first thinking it was some insight into the commands given to Moses recorded in Exodus, I soon discovered the ten secrets were about Cecil B. DeMille’s 1956 movie.  One that particularly interested me was this:

You can read my thoughts on the public display of the Ten Commandments and the other secrets mentioned in the full article, but I wonder if it would change the conversation to know that some of the monuments being fought to preserve were remnants from a marketing campaign – albeit perhaps a well-intentioned campaign – to promote the movie?

The tablets that contained the Ten Commandments from the 1956 movie starring Charlton Heston sold at auction last month for $60,000. The problem seems to be that the buyer isn’t paying up.  The tablets are described as follows:

The description of Lot 422, cited in the complaint, says the “Ten Commandments tablets written by the finger of God” are “(c)onstructed of richly hewn fiberglass on wood backing … in an early Canaanite script practiced in the late Bronze Age (c. 13th century B.C.) Moses era. These tablets were created by Paramount Studios scenic artist A.J. Cirialo, who made them to be slightly irregular with molded chips, craters and dings since they were to be cared with God’s fire bolts, and he painted them in great detail to appear as carved stone.” The tablets come with a letter of authenticity from Cirialo’s family and are in “fine condition,” according to the lot description.

The full article can be found here.

So the Ten Commandments find themselves back in the courtroom, the center of another legal dispute.  If the movie prop sold for $60,000, it makes you wonder what the originals would sell for? 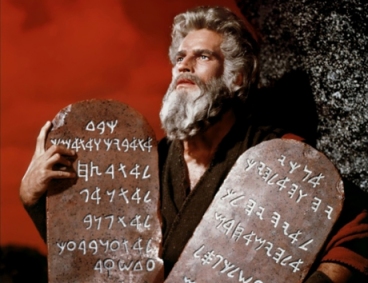